SIMENON SIMENON. A FANCIFUL LOOK AT THE MAIGRETS/ 2 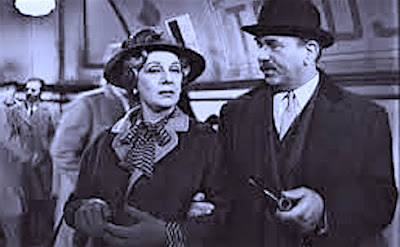 Here, personally translated for the pleasure of non-Francophone Anglophones, are some more extracts from the clever and witty creation by Marie-Claire Desmette* that exposes the pair so imaginatively. It is Louise Maigret’s journal in which she reacts to her husband’s published memoirs and clarifies their unique partnership, correcting him and Simenon on some things they wrote regarding the couple.
The truths continue: “I am also a stay-at-home wife. My husband is my boss. When we got married, it was a matter of course. And I have continued that way. If I had wanted to work outside the home, what would I have done? I don’t have a diploma. I don’t cook too badly. Should I have cooked for some indifferent folk when I could do it for an appreciative food lover? Yes, I know, too much a food lover. But that’s the way it is.”
Another truth: “My husband is sometimes unbearable. I would gladly knock him on his head if it didn’t reach so high. My patron is sometimes unbearable as well, and I’d gladly give him some knocks, too. But one doesn’t give knocks to her boss, does she, especially when he’s preoccupied.”
Another truth: “And I do listen to him. Oh yes! I’m the break from work for the Chief Inspector. For the man who undertook and undertakes a demanding profession, to which he subordinated everything, including our vacations and my projects. Sometimes, I should persevere a little before agreeing. Because agreeable, I’ve been and always will be and he knows it.”
Another truth: “I’m always in the process of running after Maigret with a thermometer, a pick-me-up, a scarf, a hat, a suitcase. And leaping out of bed to open the door for him. He’s no dragonfly, even when he’s trying hard to make no noise. I can’t prevent him from making the stairs creak, but by opening the door for him, I can prevent him from loudly groping at the lock.”
Another truth: “How can a man so smart be so clumsy? All that explains why I get out of bed and open the door before he has time to get his key out. To protect him from a charge of making a racket in the middle of the night! And to welcome him as well.”
Another truth: “I’m trying to defend myself as though I was doing too much. I hate the idea of being slave. I want to do my job well and, in addition, make the man I love happy. It pleases me to live this way, and if anyone sees in me a caricature, to each his own. Chances to laugh are too rare to neglect even one of them.”
A short truth: “He will always be the strongest of the two of us. I have to take advantage of the moments when he puts himself to bed pretty sick, for I’m the strongest one then.”
A very short truth: “He doesn't like not being master of the game, my husband.”
Her final truth: “I don’t know how to express what I’m feeling very well, but to talk about it on paper does me good. Telling him, confessing to him what I’m hiding from others, even without doing it deliberately.”

*Desmette’s Les aveux de Madame Maigret first appeared in TRACES 4, 1992. The entire piece in a different translation by Steve Trussel appeared as The Confessions of Madame Maigret in 2006. It is still available online, along with helpful notes and links to pertinent Maigret texts, here: http://www.trussel.com/maig/madame.htm
Pubblicato da Maurizio Testa a 00:06