SIMENON SIMENON. “THE ACCOMPLICES” PART ONE

Did Edmonde Pampin aid and abet Joseph Lambert in his crimes? 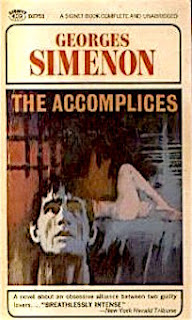 The definition of the noun complice in the French Academy’s official dictionary is straightforward. A complice is “a person who aids another in the accomplishment of an action.” By extension, the action is “more or less reprehensible,” ranging from severe transgressions to minor secrecies. In English, such a person is an accomplice. The book cover of Les Complices above depicts a man and a woman in silhouette, holding hands on a twisting path, but in my view, the two people portrayed in the novel are not truly accomplices in their actions.
A bus overtakes a car from behind, swerves to avoid a collision, and crashes into a wall, crushing and burning most of its occupants to death. At the time, Joseph Lambert is driving incompetently with one hand on the steering wheel and the other between Edmonde Pampin’s thighs on the front seat beside him. Joseph witnesses the “catastrophe” through his rearview mirror in full, but at the most, Edmonde can only speculate about the events. In not returning to the scene, helping the victims, reporting the accident, or admitting any involvement, Joseph and Edmonde seem to become accomplices. However, the two “hadn’t made any allusion to what had happened” and they “hadn’t agreed on anything.” Indeed, for the duration of the story, there is no discussion at all, not even a comment between them, about the circumstances. His mind struggling with guilt, Joseph tells lies to others repeatedly, but Edmonde says nothing whatsoever, her body language expressing indifference. Whenever Joseph looks to Edmonde with the hope of sharing the situation and assuaging his torture, there is no help there. Whatever “tacit complicity” they might have shared, “there was no communion between them” about the happening or their reactions to it. Joseph never finds any “consolation” for “his anxieties” in Edmonde “upon whom the catastrophe appeared to have left no mark.”
If they are not accomplices in terms of the accident, they were so in their long- 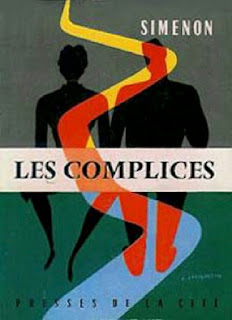 standing illegal, adulterous relationship. Yet, the ‘aid’ they provided each another therein was no more than purely physical sex. “They were not in love nor lovers, rather their relations resembled a game with rules, indicators, and known terms.’’ Indeed, they “barely exchanged monosyllables” in their interactions except for the necessities of their boss-secretary work together. Although she had been no more than a “bestiau” (an animal) for him, in his turmoil Joseph suddenly conceives that he can achieve psychological relief though sex with Edmonde. That is, he will create something spiritual above and beyond sex. Thus, he becomes “anxious to see her, to give her the sign, read the response in her eyes, and plunge into that new universe with her.” As he methodically arranges what he expects to be their liberation, he wonders if they look “like two people cursed” and “did she realize the point they had reached?” His “revelation that they might have the ability to escape” derives from his hope that “they were, they had always been accomplices.” However, Joseph has “created in his mind an Edmonde who didn’t exist in reality” and, true to her character and unfortunate for him, she cements her role as a non-accomplice.