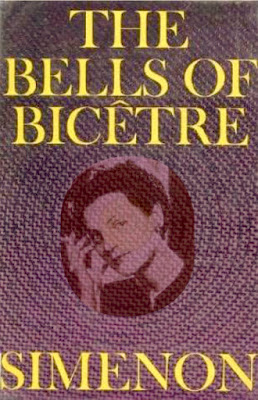 Lina in The Bells of Bicêtre is a wife the protagonist René wants to escape. Aware of the gradually disintegrating relationship between Georges and Denise Simenon, I wondered if this Lina was a representation of Denise. Notably, Simenon wrote and published the story during the early 1960s period when things were more rapidly falling apart for the couple. Curious to know if any specific psychiatric diagnoses fit Denise, I wanted to see if any factual statements were available. After learning that both Georges and Denise had, in fact, spoken out about the situation, I read Julian Symons’ warning that “it would be unwise to regard any of Georges Simenon’s three approaches to autobiography as factually accurate,” which sounded equally applicable to Denise Simenon’s autobiographical A Bird for the Cat and Le phallus d’or. Still, I hoped to uncover something objective.


Biographical materials indicate issues with alcohol and behavior triggered Denise’s multiple ‘institutionalizations’ and ‘vacations’ away from Georges and their final, permanent parting in 1964. In particular, was alcohol an intoxicant, poison, catalyst, or all of the above in the situation? Drinking and personality; chicken and egg.


Denise’s take was complex: she cited how “ever since my malady [a complicated miscarriage] in 1955, my memory often fails me.” How her need for extensive domestic help (11 employees in 1962) stemmed from her concern for protecting her “master’s” work. How egoism, narcissism, subjugation, sadomasochism, and perversion made Georges “monstrous.” Was she paranoid or he guilty?
Georges’ take was complex, too: he cited how she needed to appear and “to believe she was important.” How the size of her domestic staff was a sign of her necessity to “exercise her authority” and “to dominate.” How her “obsession with cleanliness” revealed she was “too weak” to fulfill her own “perfectionism.” Yet, his dubious claim in 1981 that “I married her […] because I would have been expelled from America” makes him seem weak, too.
Their son Pierre’s take on the past circumstances as a close observer (admittedly a subjective one) is striking. The question asked: “Did you hate your mother?” His response: “Not hated. I detested her for all the suffering she caused my father.”
Unfortunately, my search for objectivity yielded no formal medical information, mostly likely due to the requirements of patient confidentiality. Yet, some quasi-scientific diagnoses did surface. Armand Mergen, a doctor of law, medicine, and psychiatry, analyzed the bird and cat book and noted―with the disclaimer of not diagnosing Denise as a real person but as a book character―an “out of control affective disorder” with the use of transference to portray herself as an innocent victim. Ann Arensberg, an author reviewing Simenon’s Intimate Memoirs, referred to a “deterioration from histrionic, obsessive behavior to psychotic breakdown, after which her doctors insisted that the Simenons had to live apart, because Denise had become a danger to him and the children.”
My view at this point? ‘It takes two to tango.’ It began sexually. It ended mentally.