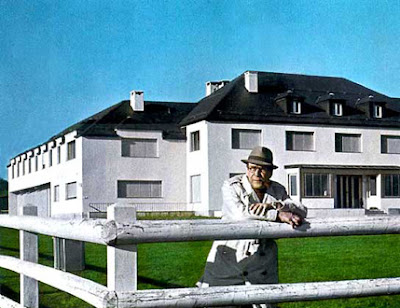 Simenon’s new house in Epalinges, his 30th but the only one he personally designed and built from scratch, draws a lot of negative commentary citing its size, ugliness, austerity, self-indulgence, extravagance, and luxury. Yet, despite this infamy, details about its physical features are rather sparse and many are merely repetitive. Mr. Google beefed up its description for me, and a 24-minute video filmed in 1967* provided a very helpful, insightful visual. This black and white statement provides numerous informative glimpses, both scanning the exterior and wandering around inside. Simenon’s personal comments are a bonus.
Observers criticize “the house without a soul” for its “impersonal, sterilized nature” and being “cold in its conception and materials.” Son Pierre referred to it as “The Bunker” whereas son John queried, “A bunker? To each his own.” To me, it is imposing, stark, and sterile on the outside, but this impression progressively breaks down inside. Simple and orderly, it looks pleasantly modern and functional. Paintings, sculptures, and books encircle mostly contemporary furniture in well-lighted rooms, none of which seem outlandish, tasteless, or annoying.
Here are some collected specific details: One passes an enormous block letter “S” on a pedestal to enter a wide asphalt courtyard enclosed by a commanding concrete U-shaped block. The six-acre grounds lack trees, but offer statues, nine of Maigret and one of Simenon, plus a wide-open vista of the surrounding countryside and mountains. There are 26 rooms behind tall steel doors and aluminum frame windows, deliberately soundproofed but countered by an intercom network for otherwise difficult communication and as needed eavesdropping.
Additional quirky features include a kitchen filled with duplicate ovens, refrigerators, dishwashers, and sinks. Two complete electrical systems with generator backup for power failures. A boiler room modulated into a complex of individual controlled heating systems for Monsieur, Madame, the four children, and their 11 domestics. Every bedroom has its bathroom, black in general, but blue for valets and pink for maids. Multiple chutes for soiled materials extend downstairs to the six-washer laundry room.
As for some other notorious rooms, the so-called “Operating Room” is a myth as son John has affirmed. A glance inside reveals a small space with a sun lamp, massage table, and plain cupboard. The “huge” playroom is simply that: a great room for kids with apparently appropriate toys and games. The indoor swimming pool, however, earns its reputation, being semi-Olympic in size (25 x 12.5 meters) with walls and ceiling of small glass tiles, a broad picture window along one side, and water changes every two hours.