Some observations about the last woman in Simenon’s life 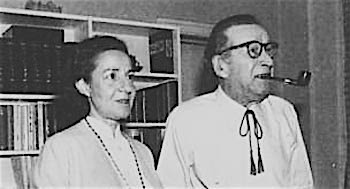 In the preface to his biography Simenon, Pierre Assouline identifies four women who are prominent in four periods during Simenon’s lifetime―Henriette his mother, Tigy his first wife, Denise his second wife, and Teresa his companion. Three others do not make the list―Boule, his long-term cook, mistress, and friend, Josephine Baker, of whom Georges said, “I would have married,” and Mme Maigret. Notably, the last of his “mistress-maids,” Teresa was basically the only woman involved by then.
Deep into his text, the biographer describes how, after Tigy and Denise, Teresa Sburelin took up the role of garde-fou for Georges. The origin of this compound noun is eerily suggestive. Garde derives from the verb garder, which means ‘to protect,’ and the noun fou, which means ‘madman.’ The literal and primary meaning of garde-fou is: “a wall or railing put up on the edge of a ditch, bridge, or platform to prevent falls.” Applied to a person figuratively, it refers to someone who prevents someone else from lapsing into an error or a fault. The best English translation might be safeguard, underscoring how Teresa was guarding Simenon against himself.
In any case, Teresa started out in the Simenon household as a femme de chambre, initially a chambermaid, for Denise in 1961. Although (or because?) she was 23 years younger than he was, she quickly became the focus of his sexual attention, but as Michel Carly puts it, “little by little, she took over completely and became the novelist’s companion, attentive, indulgent, and mothering.”
Assouline summarizes Simenon’s attraction this way: “after having known friendship with Tigy and then passion with Denise, he discovered tenderness with Teresa.” In fact, Simenon credited her with saving his life in 1964 while staying at a Swiss ski resort. He described how “that evening, seized by sudden despair, I decide to end it all. We are going along a steep rock face. I stop, I sway, I stammer something like: ‘I can’t stand it any longer.’ It’s not an idle threat. At that moment, I decided to end it all and Teresa caught hold of me in time with her fortunately strong arms….”
In a 1981 interview, Simenon further categorized his relationship with Teresa this way: “Our union is complete and total, for there is tenderness, passion, and sexuality between us. We are a true couple: a male and a female. When I describe her as a ‘female,’ it’s a compliment on my part.”
Despite their “true love, founded upon the integration of two beings,” Teresa’s life with Simenon was probably not as idyllic as Georges makes it sound. After all, his track record indicates he was a difficult man to live with. Take, for example, the regimentation Rudi Chelminski reported after an 1980 interview with the author: “every afternoon at five, they sit down in the studio over a cassette recorder while Georges begins another dictée — a rambling memoir. The writer has never been able to abandon storytelling, and the dictées have already been turned into 21 semi-autobiographical books, with no end in sight. ‘This is the hardest part of the day,’ sighs Teresa, for she is not allowed to speak after the recitation begins.” The italics are mine for emphasis….