SIMENON SIMENON. “MAIGRET”S MISTAKE” COMES OUT ON MAY 4 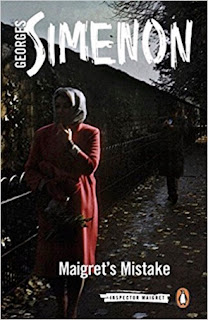 Maigret’s Mistake, Penguin’s English translation of Simenon’s Maigret se trompe, will be available through Amazon.co.uk as of May 4, 2017. Both paperback and Kindle editions are being released. The opportunity for delivery of the paperback to the USA will appeal to some because the paperback and Kindle editions will not be available from Amazon.com until December 5, 2017. In contrast, May 4, 2017 holds as the release date for the following other Amazon sources: Australia Kindle; France Kindle; Germany paperback and Kindle; India Kindle; Italy paperback and Kindle; Japan Kindle; Mexico Kindle; Netherlands Kindle; Spain paperback and Kindle. Unfortunately, the later December 5, 2017 release date pertains to these remaining Amazon sources: Brazil Kindle; Canada paperback and Kindle; China paperback; France paperback; Japan paperback; Mexico paperback.
Be aware the ISBN-13 for this new edition is 978-0241279847, which should facilitate searching for the book from various other sources.
Maigret se trompe originally appeared in 1953. Maigret’s Mistake first appeared as an English translation in 1954. Its translator was Alan Hodge then, and now the translator is Howard Curtis.
The original work was the 71st in Simenon’s order of publication, and this work is the 43rd in Penguin’s modern series of translations.
This story interested me for the comparisons and contrasts Simenon develops regarding Maigret and Gouin. The policeman and the neurosurgeon have achieved similar levels of celebrity and notoriety. Yet, they are not the same. The denouement is as much a surprise as is Maigret’s mistake.
(Note this oddity: a short story, Une erreur de Maigret, appeared as the 28th work in the Maigret series in 1944. When translated into English by Jean Stewart in 1977, it was also entitled Maigret’s Mistake.)