On two short stories with the exact same title 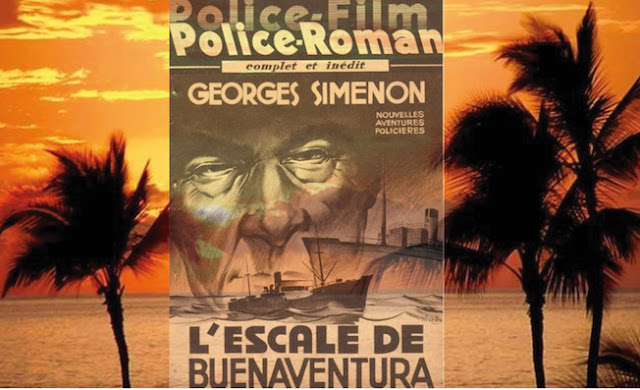 Perhaps it is not surprising an extremely prolific author gave the same title* to two works, but I wanted to try and figure out why. Simenon wrote Layover at Buenaventura (L’escale de Buenaventura) in 1938, a story of 23 pages, and another in 1946, a one third shorter story of 8 pages. Here’s a look at them:
The first story is a complicated crime adventure with a surprise ending. The second story is a straightforward psychological drama with an anti-climactic ending.
The geography differs, too. In the later story, both the plot and action unfold entirely within a hotel in Buenaventura, Colombia. In the earlier story, the plot derives from the city of Buenaventura, but the action transpires aboard a ship in Panama City and these two cities are 338 nautical miles apart.
There is a lot of crime in one—trafficking, robbery and murders. There is no crime in the other—in fact, the slot machine that usually ‘robs’ returns a huge jackpot. The conflict is active in the one and passive in the other. Thus, one gets a violent fatal shooting versus another merely gets a quick slap in the face.
Sexual content is plentiful in one with nudity, intercourse, and promiscuity, whereas it is limited in the other to a few minor innuendos exchanged between men.
Black bartenders appear in both, but Will as “the bar’s Negro” figures substantially in one plot, whereas Joe “the Negro” in the other exists only to pour drinks, wipe glasses, and make small talk. Doctors appear, too, but “Doctor” is the formal title for one man and the casual nickname for the other.
The exception tends to prove the rule in this comparison, for there is essentially just one theme common to both stories: the heavy drinking of alcohol. One character “succeeds in getting drunk every night,” another regularly reaches “the 3rd stage of inebriation,” and on and on.
After finding these two stories more different than alike, I renewed my original questioning: why apply the title Layover in Buenaventura twice? Here’s my theory: in 1934, the author went off on a “trip around the world in 155 days,” and it happened to include, at the least, a layover in Buenaventura. I suspect that place aroused Simenon so much he HAD to set at least five** stories there. The two I’ve read so far describe Buenaventura as “cursed country.” It is “one of the most desolate ports in the South Pacific, a low gray coastline, where the sky is always hazy, where a hot, stifling humidity weights the earth down. You have to change your clothes three times a day and nights don’t bring any coolness.” It is “a world that smelled frighteningly of emptiness,” so much so that “this port did not seem like a real port.” Take the rainfall for example: one character laments, “You’re familiar with Buenaventura… As for the rain, accept that air, sky, and sea are no more than the same liquid matter.” It is a place “where, if it was not truly raining, the fog soaked everything as much as the rain.” A place of  “hot sticky haze, all around, so thick one could not tell if it was rain or not. On top of all this moisture, overwhelming temperatures, mold, rot, and odors abound, all adding up to make it a memorable spot worth writing about.

* Other identical titles include The Yellow Dog for two Simenons published in 1929 and 1931 and Destinies for a Georges Sim in 1929 and a Simenon in 1981.
** Buenaventura is prominent in at least three other works: The Long Exile, The Man Who Machine-gunned Rats, and The Man Who Battled Rats or The Most Ordinary of Stories.
Pubblicato da Maurizio Testa a 23:39