Everybody is a voyeur. Concierge, cops, and crowd, they all join in. 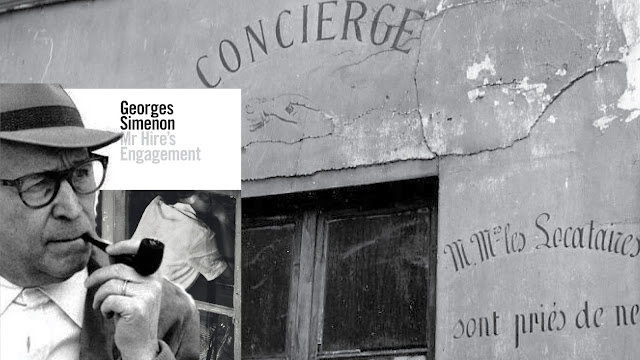 While Hire ogles and Alice looks back, many others do their own sort of observation. The concierge watches from her booth at the front door. “The concierge’s stern eyes looked afar, but more inside than outside.” Spotting evidence that makes Hire a murderer in her eyes, she informs the police. “I didn’t look him in the eye, but I saw it nevertheless.” Nervously keeping track of the resulting police stakeout, she “got up three times that night and each time raised the curtain to assure the detective was still pounding the pavement.” She gets more reassurance of the surveillance when “she leaves her booth and sees four or five people watching the door as if they were waiting for something.”
The cops are all eyes, too. A detective under a hat “spends days and sometimes nights observing everyone and he was beginning to get to know people by sight” as he surveys the neighborhood where Hire lives. “Used to watching nastily,” a bearded detective “takes quick glances, then very long ones, and even stares for a while” as he tails Hire all over around Paris. In a series of striking repeated images, the author has the policemen observe the suspect through glass, effectively putting the presumed murderer under a lens. One “watches him through the barred windows at work.” Another is “on the other side of the glass door, [where] the hallway is obscure, but he still sees” Hire pass by. “In the shadows, behind the panes, a man was standing who was calmly watching him while smoking his pipe.” Another  “doesn’t hesitate to crouch down to watch through the barred window.” Hire “saw the detective’s ridiculous nose and beard crushed against the window.” Out in the open, “the detective next to the police officer watches him coming and going, like a teacher watching over his pupils in a school courtyard while chatting with the principal.” While some detectives “with Mr. Hire’s description in their pockets carefully looked at travelers” in the railroad stations, in Hire’s apartment another sends visual signals to Alice through her window declaring: “Soon!”
In fact, Simenon skillfully accelerates the cat-and-mouse activity. Like a lynch mob, “everyone is waiting for the same thing,” and the noose tightens perceptibly. Hire spots “four men near a door with the bearded detective observing him from a distance.” An angry crowd, hungry for an arrest, gathers outside his building. “There is a group of a dozen curious on the sidewalk. People go up close to look at the plain-clothed detectives who turned angrily back on them.”
When Hire panics and climbs onto the rooftop in his attempt at escape, the crowd “backs up into the empty lot [where the murder had occurred] on the other side of the street in order to see better.” In fact, “Life in the crossroads stops. Autos plug up the crossing. Even the traffic cop looks up in the air like the others” to where Hire is hanging from the roof’s edge. “One thinks he is going to let go. One sees his body tremble, curl up, unwind.” Wicked Alice is also standing in the empty lot. “At times but rarely, she ventures a look towards the grim heavens whose harshness hurts her eyes…” Perhaps, she is feeling a little remorse….