SIMENON SIMENON. MAIGRET AND THE ENGLISH /1 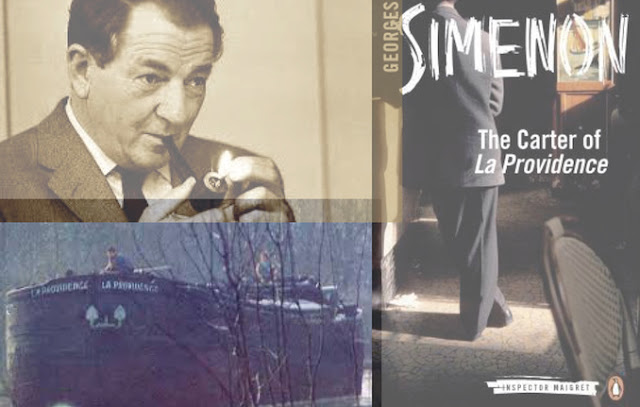 In this and subsequent posts, I will consider Maigret’s intercultural encounters with the English. Maigret’s first significant contact with an Englishman occurs on the canals of the Champagne region in Le Charretier de la ‘Providence’ (1931) and is renewed in Paris in La Guinguette à deux sous (1932); there is then a break until Mon ami Maigret (1949), in which three English characters, including a Scotland Yard detective, are present as Maigret investigates a mysterious death in Porquerolles; Le Revolver de Maigret (1952), when the commissaire travels to London, and Maigret voyage (1958) in which a wealthy Englishman is found dead in his Paris hotel.
Sir Walter Lampson, sixty-eight years old, is a retired colonel in the British Indian army who now leads an itinerant lifestyle between a home in Porquerolles, a small French island in the Mediterranean, and travels on his yacht, the Southern Cross, staying in various locations in France, England and Italy. Maigret, who has been called to investigate the discovery of a woman’s corpse, meets him for the first time at a lock side bar where the Marne joins a canal. The reader’s first impressions of Lampson are of the contrast between his English gentleman’s clothing and the shabby appearance of the other clients of the bar and of his impolite behaviour towards all and sundry, Maigret included. Lampson is accompanied by a sort of civilian aide-de-camp, Willy Marco, who although he has the snobbish manners and clothing of an English gentleman is clearly Lampson’s social inferior and who it transpires is not English at all. Lampson identifies the victim from a photograph as his wife, Mary, and invites the commissaire aboard his yacht. In addition to his wealth and arrogance, further features of the colonel’s lifestyle and character are quickly revealed: he is a heavy whisky drinker and shows little emotion, key elements which will remain constants in Simenon’s characterisation of the English “milord”, although as the narrative unfolds complexities emerge and the portrait becomes fuller and more nuanced.
Through Maigret’s conversations with Lampson, but also through his interviews with Willy Marco and the colonel’s mistress, Madame Negretti, the reader learns more about the Englishman’s former life. In India, he had had servants, horses and cars and a glittering military career in front of him but was obliged to retire as a result of a scandal, suddenly finding himself rejected by his former social world and with a greatly reduced income. Despite keeping up the appearances of a wealthy English gentleman, he finds it difficult to maintain his expensive lifestyle and to indulge his considerable appetites for women and alcohol. Moreover, Maigret comes to understand that in a sense the snobbery and rudeness, the drunkenness and orgies, mask a certain unhappiness and emptiness to which Lampson cannot admit as this would involve recognising that his life has been a failure in terms of the standards of his social milieu.
While the snobbish Epernay juge d’instruction is impressed by Lampson’s airs, he is as unfamiliar as is Maigret with English upper-class society, and the more the colonel insists on his status as an English gentleman, the clearer it becomes that he is in fact no longer part of the world to which he had formerly belonged. Willy’s admiration for Lampson is based on his own snobbish aspirations as the son of a Jewish fig merchant from Smyrna who has nevertheless somehow received an upper-class English education which he has used to gain access to the colonel’s world, a world of which he can never truly be part. For Madame Negretti, and it would appear for Lampson’s murdered third wife, the colonel represents primarily access to a wealthy lifestyle, and the former does not hesitate to depart when it becomes clear that his financial resources cannot guarantee her desires. In short, the colonel, desperate to maintain his self-image as an English aristocrat is obliged to surround himself with hangers on for whom he represents a means to an end and whom he loses to either death or desertion.
As the story unfolds, and as Maigret learns more about Lampson, his initial dislike of the arrogant aristocrat becomes mixed with understanding and even a measure of pity. At the end of novel, Maigret discovers that Mary Lampson was in fact the former wife of Jean Darchambeaux, the carter in charge of the horses which pulled the Providence barge and whose route, by coincidence, had coincided with that of the Southern Cross. Mary (or Céline, as she had been previously known) had abandoned her first husband when he had been sent to prison many years earlier and had made a new life for herself, ending up as the third Mrs. Lampson. Darchambeaux had recognised his ex-wife and killed her before attempting to commit suicide and mortally injuring himself When Lampson asks Maigret why Jean had returned to die on the Providence, the commissaire draws a striking parallel between the carter and the English colonel: each in his own way had lost his past life and was seeking something to hang on to, a ‘lair, if you like… his own nook. There are all sorts of lairs, there are some which smell of whisky, eau-de-Cologne, women… With a gramophone playing and…’
Just as Maigret’s attitude to Lampson has changed, so the colonel now regards the policeman differently too, even going so far as to call him a ‘gentleman’ as they drink a final whisky together. The final image of Lampson as the Southern Cross departs is of a man who resembles in all superficial details the colonel as Maigret had first encountered him - drunk, impassive, apparently assured of himself and using his money to jump the queue to pass through the lock; the reader can only reflect on whether a change has occurred or whether the English “milord” remains trapped by his national and social origins.