Everybody is a voyeur, but the protagonist is the primary looker. 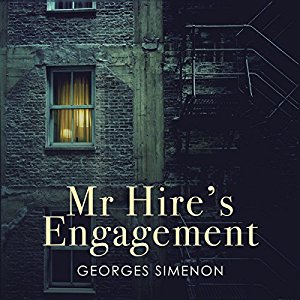 The novel Mr. Hire’s Engagement focuses on voyeurism in all senses of the word. The protagonist, Mr. Hire, is the prime partaker, but the object of his scrutiny, Alice, is an exploiter, too, and multiple bit players—the concierge, the cops, and the crowd—are participants as well. A series of posts will document this phenomenon.
Hire waits every night in his pitch-dark apartment until “barely ten feet away, a light bursts forth as a window lights up in a bedroom where one can distinguish the smallest detail.” Given his obsessive desire to watch, he presses his “forehead against the frozen window pane with only his pupils going back and forth” to follow “every movement of the woman next door.” Watching for a full hour, he does “not move except to scratch away the frozen fog his breath had stuck on the window.” His obsessive inspection yields varying returns: he watches young Alice disrobe with “voluptuous stretching.” Sometimes, he “sees her body in transparency though her nightgown.” Sometimes, “her hand instinctively persists in caressing the breast he sees in relief. ” One time, she lies “flat on her belly with her entire body coming alive, offering sudden erotic buttock movements.” No wonder, “while looking through the window in front of him,” hungry Hire forgets to eat. He tacks up wrapping paper to obstruct his viewing, but the feeble man cannot resist peering into her bedroom. “Mr. Hire shut the door, and even before taking his coat off, he headed for the window and lifted one of the papers up.” On his target’s days off, he spies on her lounging about in her underwear until she goes out. He follows, sticking close as she walks, ogling her “full swaying hips stretching her skirt with every step,” or as she sits, keeping “his stare glued to her lively neck gilded with soft fuzz.”
As Simenon develops the story of both facing incrimination for a recent murder, he gradually transforms his protagonist’s focus from the prurient to the platonic. One day, seductive Alice solicits Hire directly:  “You have seen everything, everything! […] “Don’t you want to help me?” But he just “stares at the flowers on the wallpaper” and ultimately “opens the door that he locks behind her.” Rejected but not defeated, Alice continues her strip teases and, imagining “a tiny little hole in the wrapping paper with Mr. Hire’s eye hidden there the way it was that time behind the keyhole” of his door, she expands into sponge bathing and parading nude. When she comes back to entreat him again, he is still unaware of her ulterior motives, but he has changed his mind. “There is only one solution: do you want to disappear with me?” It is “the most extraordinary moment, the high point in his life,” for he is in love!
Although things look to advance from seedy to sublime for him, Hire hurtles down a familiar Simenonian tragic path in an accelerating rush of observations. He “watches” for her arrival at the station, but she is nowhere in sight. Confused, he seeks the solace and security of his apartment. “He had only the threshold of his house on his retina.” Once there, “he notices the gathering. He could not have not noticed it.” The crowd and the police panic him so much, he looks for an escape, but “he saw nothing.” In no time, Mr. Hire is “a dead man whose eyes had just been closed.”