Everybody is a voyeur. The primary woman returns the look. 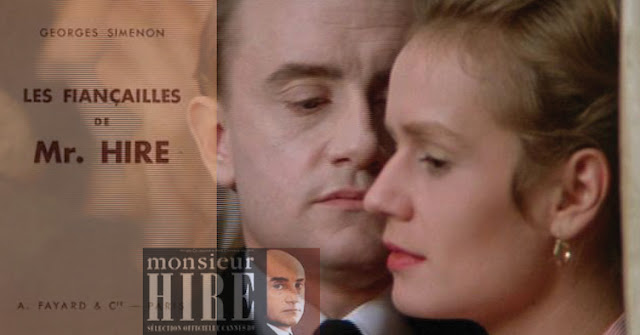 Voyeurism is widespread in the novel. For instance, the commonest French verb meaning to ‘look’ appears 140 times. Yet, the type of ‘looking’ varies: Hire’s is vicarious and Alice’s is opportunistic. Both happen to use a two-way street, in alternation, with Hire staring at Alice from his dark den and her observing him from her darkened bedroom. Alice “saw Mr. Hire’s lighted window. […] She had not lit her lamp.” Another difference is that Hire believes she is unaware, but Alice knows he is watching. “Her look […] reached the window. […] What was she looking at? […] He clearly saw the girl’s fleshy lips half-open in a smile. But for whom? Why?” She knows he is spying on her. “She knew Mr. Hire was there.”
What is more, her window exchanges gradually evolve in a different way than Hire’s do. At first, hers is a prideful exhibitionism. She is simply showing off: “She pushed the sheets away a bit and stretched while sticking out breasts that ballooned the white silk of her nightgown. He did not move, so she got up, exposing her pink thighs for an instant.” When he is tailing her outside, as he stares, she toys with him. “She was playing her role. She pretended to not see him, to be relaxed, unconcerned. Twice, she powdered her nose and put on lipstick. Twice too, she tugged her skirt down as if she was surprised that Mr. Hire was looking at her knees.”
But her demonstrations advance into predatory manipulation. Brazen Alice goes to his door in provocation, but timid Hire does not yet dare open it. “She looked down. A moment before, the outline of the keyhole stood lit up, then something intervened between the door and the light. She sensed his eye, pulled back a step to get within his line of sight, and proudly thrust out her exuberant bosom.” Suddenly, “the eye disappeared” because Hire also stepped back, expecting a crisis, holding his breath, staring at the door. “Was he also seeing an eye behind the keyhole?”
Later on, Alice watches as Hire watches. “From the obscurity of her bedroom, up on her knees on her bed to see better,” Alice observes him “walk up to the keyhole and glue his eye there” before accepting the inevitable police summons. She delivers hers: “She stuck her paper on her windowpane” and “he squinted under his bushy brown eyebrows to read: I absolutely have to talk to you.” A few more window signals precede direct physical seduction. “She pulled him to her. […] Her entire body was writhing, seeming to take possession of the man while she glued her mouth to his.” “He gently disengaged himself” but has taken her bait. He proposes they run off together, asking her to “think about it until tomorrow….” Hire heads on, all alone, for he only sees her once again. After “he looked into her empty bedroom with warm nostalgia,” he catches a glimpse of her at work. “He could see, next to the counter, Alice’s pink face, her white apron, her bare arms.” Hurtling down a tragic path, he is always looking for her, but his last vision is purely imaginary: “without daring to look at the dairy bar,” this “did not prevent him from imagining Alice’s bent-over silhouette walking her rag over its threshold.” Alice, however, does see him again: dead!