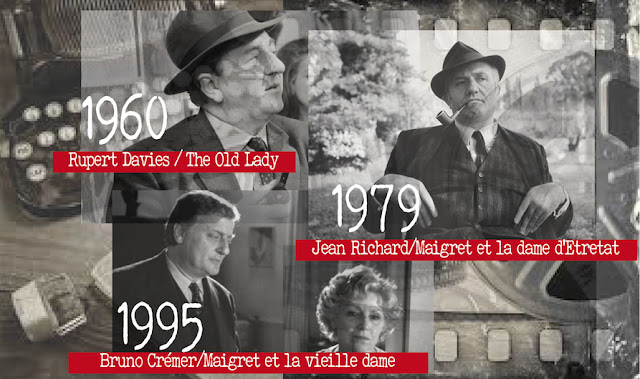 It is a measure of the international popularity of the Maigret stories that television adaptations have been made in a range of languages for audiences throughout Europe and beyond. Three versions of Maigret et la vieille dame have appeared, featuring Rupert Davies (The Old Lady, BBC, 1960), Jean Richard (Maigret et la dame d’Etretat, Antenne 2, 1979) and Bruno Crémer (Maigret et la vieille dame, France 2, 1995) respectively in the role of the commissaire. Whereas The Old Lady was filmed mainly in the studio, the Richard and Crémer versions were both shot on location; this article will review the degree to which each of these telefilms realises the Etretat setting of Simenon’s novel.
Stéphane Bertin, the director of Maigret et la dame d’Etretat, featuring Jean Richard, insists throughout that the action is unfolding in the same geographical setting as the novel, even going so far as to add a reference to Etretat, absent in Simenon’s original, in the title of the episode. The telefilm opens with views of the cliffs and streets of Etretat before moving to the burial of the murdered maid Rose Trochu in a scene filmed at the cliffside church of Varengeville near Dieppe, which substitutes for the church of Yport. There are numerous shots of Etretat’s pebble beach, the arches in the chalk cliffs on either side of the town and the famous “aiguille creuse”, a fifty-five-metre-high obelisk rising from the sea, along with sequences filmed in nearby Fécamp and at the petrol terminal at Antifer between Le Havre and Etretat, the latter scene being a further addition to Simenon’s text.
By contrast, in David Delrieux’s, adaptation of Maigret et la vieille dame, starring Bruno Crémer, Etretat is completely absent. The overall impression is of a seaside setting: as Maigret dismounts from the train, the viewer sees children with shrimping nets, there is a Hôtel des Falaises, Madame Besson explains that her father had been a fisherman and there are nets drying outside Rose’s family home. It may appear curious, then, that the viewer never sees the sea, a fact which becomes less curious when the end-of-programme credits suggest that the episode was filmed in the landlocked Czech Republic! Delrieux’s aim seems to be to create the ambiance of a seaside resort in the south-west of France rather than Normandy – Arlette Sudre lives in Bordeaux rather than Paris, Inspector Castaing’s car has a Gironde registration plate, Madame Besson’s calvados becomes cognac and Rose’s father’s cider is transformed into red wine.
In addition to this difference in physical location between the two telefilms, there is a further contrast in the historical setting. While Maigret et la dame d’Etretat with Jean Richard is broadly contemporaneous to its 1970s production, Maigret et la vieille dame with Bruno Crémer has an early 1950s “look”. There is a further contrast in the differing approaches of the respective production teams. Maigret et la dame d’Etretat draws on a number of techniques associated with the Nouvelle Vague movement, with in-the-street filming, handheld cameras and non-professional extras. Maigret et la vieille dame, on the other hand, is closer to the so-called cinéma de qualité approach, with the recreation of a historical and social ambiance through the careful (and often expensive!) choice of costumes and props to create a reconstituted version of early-1950s France as it might be imagined by the modern television viewer; and it should, of course, be noted that this is a subjective interpretation of an epoch rather than a necessarily historically accurate depiction.
In conclusion, although both TV adaptations follow quite closely the storyline of Simenon’s narrative, neither seeks to reproduce the setting of the novel in all details. While Maigret et la dame d’Etretat insists on the Etretat location, the narrative unfolds in a different historical period; if Maigret et la vieille dame has a historical context closer to Simenon’s 1950 novel, the geographical specificity of Etretat and the Normandy coast is completely removed. The degree to which such factors influence a viewer’s appreciation of each adaptation of Simenon’s text will depend on the relative importance he or she attributes to their historical and geographical resemblance or otherwise to the literary point of departure; and in an overall appreciation of each telefilm, these are only two factors amongst many, including the quality of the screenplay and scriptwriting, the casting and performance of the actors, and other considerations such as the camera work and soundtrack. Both adaptations remain accessible in DVD format and readers of this blog are encouraged to make their own judgement and, above all, enjoy these dramatic tributes to Simenon’s creativity.