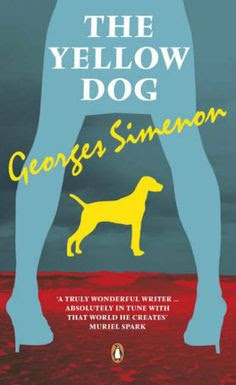 Having recently examined the matter of two Simenon stories with the exact same title (http://www.simenon-simenon.com/2018/03/simenon-simenon-layover-at-buenaventura.html), looking at another exact title coupling seems appropriate. The Yellow Dog is a short story written (by Georges Sim) in the winter 1928-
1929, first published in 1929 in a periodical, and subsequently incorporated into The 13 Enigmas in 1932. A novel with the yellow dog title appeared almost contemporaneously, written and published in March 1931 and April 1931 respectively.
Why the identical titles? My best guess is that Simenon recognized a captivating concept in his dog in the initial, short 7-page story and simply capitalized on it in the subsequent, much longer 182-page novel. Note the number of Simenon works that take advantage of the ‘brand name’ Maigret in their titles. Maigret and the Little Pigs without Tails is a prime example of this approach! Granted identical titles confuse, but this is probably only seriously significant for librarians and online searchers.
Yet, in The Yellow Dog works, this curious creature does play a central role as common phrasing and descriptions confirm: the first and an important similarity is, precisely that, the similarity of the two dogs. Perhaps it is not an identifiable breed, but notably the author’s pet dog during the time he wrote both was a Great Dane named Olaf.
In the short story, the dog is physically “big” and “yellow” with a “bristly coat” and “phosphorescent eyes” that give it a “shining look.” Activity-wise, it “accompanies the nocturnal intruder like a shadow” and stands out by being “so human” with its recurrent “howling” in a “manlike voice.” Figuratively, it becomes an “extraordinary” canine that evokes a “supernatural mystery.”
So too in the novel, the dog is physically a “big yellow beast,” an “ugly animal” with a “bristly coat.” Activity-wise, it lives with “a vagabond who could be its owner,” and stands out for its “growling” and being anthropomorphically ”aggressive” and “astonished” and “grateful.” Figuratively, it becomes an ”extraordinary” and “vulgar” canine that evokes a “supernatural creature.”
As well, in both works, the dog serves a primary, similar function: to incite and excite fear. It rapidly becomes more important as an imagined symbol than a physical presence. Indeed, its dramatic effect is vastly greater than its short descriptions and minimal activity within the texts.
A striking similarity lies in the number of its appearances. In the short story, the dog is reported as being present at each of the four crimes. In the novel, the dog shows up four times as well.
Another similarity in both works lies in the fact that, despite their great difference in length, the action transpires in four days.
Finally, both works are similar for the way they display how the writer gets many miles out of a few words. They are early examples of how Simenon would succeed with his ‘limited’ vocabulary and “short’ texts in his Maigrets and romans durs.