SIMENON SIMENON. A CONTRAST BETWEEN EUROPE AND AMERICA 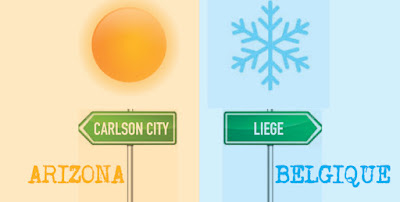 In his roman dur, one of his so-called “American” novels (The Fugitive/Account Unsettled/Crime Impuni), the writer cleverly juxtaposes and dramatically contrasts the climates of two worlds far apart. Part One transpires in eastern Belgium and Part Two in southwest America. The reader experiences both locales through the senses of the protagonist and gains insight into how climate can affect behavior.
In Part One, the composite climate was cold, wet, and dark. In fact, the coldness predominated. For example, inside university student Elie’s boarding house bedroom, the place where he spent most of his time, he typically wore his hat and overcoat, and when it got “as cold there as on the sidewalk,” which was often, he “had to crawl into bed fully clothed” to get warm. Exposed to “long winters lasting six months and more,” he recalled “fighting with his brothers for boots” in order to avoid being one of those “painfully trudging barefoot in the snow.” That life explained why Elie was always “so afraid of the cold” and continued to “spend hours with his feet on the kitchen stove” thereafter. During these Simenon provided Belgian days, when it was “freezing enough to split a stone,” which was common, “black ice covered the streets like black varnish,” turning them into a “cold desert.” And, when it was not freezing, there was “a dark cold rain that seemed eternal” with “a few grayish flakes of snow mixed up in the threads of rain.” And, even if it were not snowing or raining, “the streets were drowning in fog.”
In Part Two, Elie has fled that “black and white universe bordered by gray” for a composite climate that was hot, dry and bright. In fact, where he was now living in Arizona, the heat predominated. Although it was “almost cool” in the morning because the sun was low, typically “the sun’s line gained little by little on the shadows and, later, by the beginning of afternoon, one had to lower the Venetian blinds, the ventilators no longer stirring anything but hot air.” Even if “there were a semblance of a breeze,” usually “the thermometer at the hotel door read 95 to 113 degrees,” so that “huge ceiling fans circled silently day and night.” Is it “hot enough for you?” was “the ritual joke,” but Elie “never complained about the heat, the hotter it was the more content he seemed. He appeared completely happy to sweat, and the smell of his sweat was strong.” In fact, “he sniffed his own odor with delight” because it was so different from where he had lived before, where “he had trouble convincing himself that there were summers.” In addition, rain was as rare in Arizona as it was common in Belgium. “It did not rain more than three days in a year.” And, what is more, there usually was “no cloud in the sky, which stayed the same uniform blue for weeks” and, because of the always exposed “brilliant” sun, “its light was blinding.”
In sum, back in Liège, Belgium, Elie “knew only that, one day, if he had some luck, he would live in a region were there was no winter, where he would enjoy the sun’s heat all year long.” Now that he was in Carlson-City, Arizona, it was no wonder, despite Simenon’s carefully crafted downturn for him, that Elie “would prefer to sit on the curbside and allow himself to die in the sunshine.”