SIMENON SIMENON. “MAIGRET AND THE LAZY BURGLAR” COMES OUT JULY 5 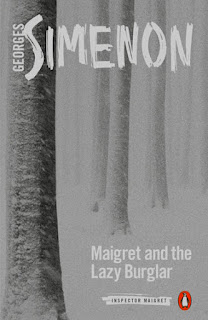 Maigret and the Lazy Burglar, Penguin’s English translation of Simenon’s Maigret et le voleur paresseux, will be available through Amazon.co.uk as of July 5, 2018. Both paperback and Kindle editions are being released.
The paperback and Kindle editions become available from Amazon.com on the same day, July 5, 2018, which is an improvement over the past timing of releases for the Penguin series in the USA.
July 5, 2018 also stands as the release date from the following other Amazon sources: Australia Kindle; Canada Kindle; France Kindle; Germany Kindle; India Kindle; Italy paperback and Kindle; Netherlands Kindle; Spain paperback and Kindle.
July 16, 2018 is the release date for the paperback in Australia.
A March 5, 2019 release date stands for these other Amazon locations: Brazil Kindle; Canada paperback; China paperback; France paperback; Germany paperback; Japan paperback and Kindle; Mexico Kindle.
Be aware the ISBN-13 for this new edition is 978-0241303917, which should facilitate searching for the book from various other sources.
Maigret et le voleur paresseux originally appeared in 1961. It came out in English translation as Maigret and the Lazy Burglar in 1963 and eight reissues with the same title followed through 2006. The translator then was Daphne Woodward, and the translator for this new Penguin edition is Howard Curtis.
The original work was the 85th in Simenon’s order of publication, and this work is the 57th in Penguin’s modern series of translations.
This novel presents another story that highlights Maigret’s compassion while investigating a case. The murder victim here is a long-term “friend,” a “good” burglar whose professional activity enabled him to support his mother. Because of his “regard” for the dead man, Maigret is saddened and upset. He solves the crime, of course, but not without ensuring that the burglar’s wealth passes on to his mother (and his lover), which is not exactly an action that follows the letter of the law.