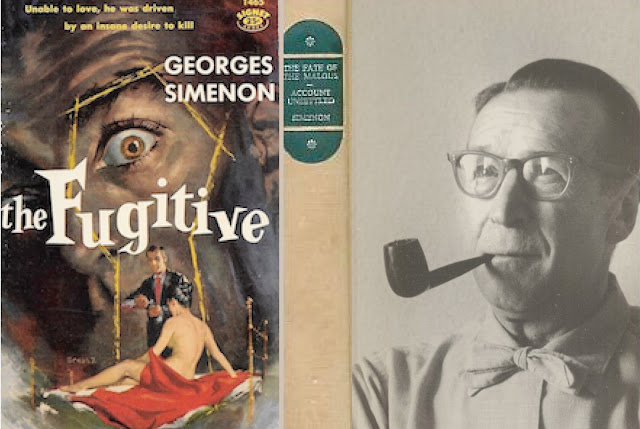 During a 1955 interview in Lakeville, Connecticut, Simenon remarked that the “reading of certain novels is a little like looking through the keyhole to learn what the neighbor is doing and thinking….”
In evidence, the author had a protagonist apply his eye to a keyhole repeatedly in a so-called “American” novel published in 1954. It first appeared in French (naturally) as Crime impuni and subsequently in two English translations: The Fugitive in 1955 and Account Unsettled in 1962.
The protagonist Elie’s voyeurism begins when he accidently sees his antagonist Michel hugging and kissing his preferred Louise in the street outside the boarding house run by her mother where they all live. Elie observes the day-to-day activities of the two more carefully, and one day, when the mother is away at Mass and the other boarding house residents are at school, his suspicions are sufficiently aroused to peer through the keyhole of the door leading into Michel’s bedroom.
Lo and behold, he sees Louise, “on the edge of the bed, knees spread,” and Michel, “standing, thrusting forcibly with rhythmic bold strokes. […] Right at the end, Louise surges excitedly two or three times and her face contorts.” Elie wonders “if it was pain or pleasure.” Notably, when he had had sexual relations “for the first and only time in his life,” he contracted a venereal disease and abstained thereafter, but now his suppressed interest in sexual activity is piqued. “He could not stop recalling that bed” and “until his death, he would revisit the image of Louise as he had just seen her.” So, “again the next day, he ends up in the same place at the same time,” and the bizarre keyhole routine replays day after day with similar results. Each time he watches the couple, “the images are just as precise, the details just as clearly defined as if he were looking through a magnifying glass.”
Ironically, Elie learns Michel is a voyeur in his own way. Louise’s mother finds and shares some photographs of nude women he has been taking over time. Indeed, when Elie’s “eye finds the keyhole” one day, he sees Louise “right in front of him” and “completely naked.” A camera on a tripod clicks as Michel directs Louise in different poses, and Elie cannot resist watching the action for a full “half hour” and “two rolls of film.” Michel is mostly “invisible,” but “the last time he enters Elie’s field of vision, he is naked as well and he suddenly lies down on top of her.” In yet another perverse example of voyeurism, the couple looks at the door simultaneously. “Both know he is there” because “his face makes the keyhole a dark shadow that, without him, would be a bright hole.” Although Louise turns her look away from him, Michel laughs and mocks him directly. It is then that Elie “discovers” he “must “punish” Michel. It is now “a question of justice.” But he does not act right away; instead he keeps on spying obsessively. In fact, for eight days in a row, Elie “kneels in front of the door to watch Michel (not Louise) brazenly take his pleasure while taunting him the whole time.” Ultimately, vigilante anger overrides prurient interest. The result? Elie shoots Michel point-blank in the face.