SIMENON SIMENON. ON WHODUNIT IN “THE KRULL HOUSE” / 1

About the rape and murder suspect #1 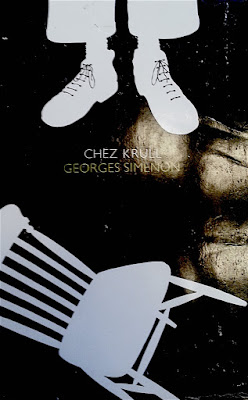 The Krull House (Chez Krull being the title of the original French version and first English translation) thematically makes a family of “foreigners” look “guilty” of having raped and killed a young girl. However, the actual culprit remains unknown in the end, stimulating my search for proof of or clues to whodunit.
There are four suspects to examine: cousins Joseph and Hans Krull, the town drunkard Potut, and a complete stranger.
Joseph Krull is a disturbed individual whose behavior is certainly bizarre, but is he guilty of the combined rape and murder? Here is a listing of some manifestations suggesting he at least has the potential to commit higher crimes: Joseph at 11 knocks down and chokes a classmate. He gets expelled from school (but recovers sufficiently to qualify to study medicine later on). At 15, he shoots and kills the family’s cat. At 19, he seduces the maid next door who loses her job in punishment for her sin.
At the time of the novel, when Joseph is 25, much of his behavior reflects big troubles with sexual matters agitating and upsetting him, making him terribly “anxious” as telegraphed by his “trembling” hands and “jumping” Adam’s apple. Some examples: “three times a week,” he “hides in a corner” to watch a pair of lovers having intercourse. At night, he roams about as a “voyeur” spying on other fornicating couples and follows those events with offers of money for sex to “little girls” like Sidonie—the future victim—without any success. He “rather regularly” frequents a prostitute “demanding” intercourse “outside in a corner between two walls” instead of the “usual” in her house like other customers. The established voyeur witnesses his cousin Hans sexually overwhelm his sister Liesbeth through the keyhole of her bedroom door and then stations himself there for the more willing repetitions. Likewise, Hans witnesses Joseph stalking Sidonie “with a look of doing something very serious.” Are his “trembling fingers” those of a future strangler? After the discovery of the body, the narrator incriminates Joseph indirectly with frequent descriptions such as “his so pale and exhausted look” and “his upper lip beaded with sweat” and how “when he is sure no one is looking, he dares raise his anxious eyes.”
Well after the crime, thinking “perhaps it would be sufficient […] to lie without blushing,” the ordinarily honest Joseph seems to do just that. He contends he followed Sidonie on the eventful night [purely] because he was “attracted to her” by their mutual histories of having been sick with tuberculosis and he [just] “wanted to talk to her somewhere away from her friend who used to mock him.” And, lo and behold, “another person was following her, a stocky man wearing a felt hat.” He “approached her” and she “did not reject him.” They hugged and kissed. “The man became more enterprising” and “she struggled to get free.” They rolled on the ground. “He did not see the other one strangle her… He believed…”
That rape accompanied the murder increases the focus on Joseph. But now it is time to leave Joseph at the scene of the crime and anticipate moving on to examine suspect #2, Hans who had recently descended on the Krull family out of the blue.