SIMENON SIMENON. THE DEATH OF CORNELIUS 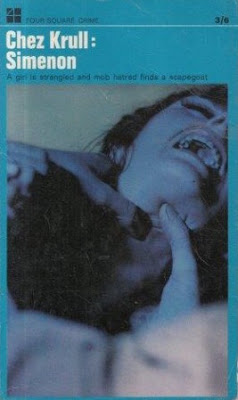 The Krull House, which is entitled Chez Krull in the French original and the first English translation, presents a vivid, true to life portrait of anti-German xenophobia in a small French town. While these thematic circumstances are predictable and explicable, the resulting denouement—the death of Cornelius, the patriarch of the Krull family—is surprising and inexplicable. Slowly developed as a character and ultimately emerging as an important figure in the intrigue, here he is: Cornelius is basically indifferent. The author often describes him as sourd, a word with two different meanings. For example, he “has that calmness, that dignity of sourd people who follow their inner dream in the middle of others’ agitation.” Gradually, it becomes clear Cornelius is by no means (1) ‘hard of hearing or deaf,’ rather he is (2) ‘indifferent to reality, refusing to recognize facts.’
Cornelius is practically silent. “Father hardly speaks.” Although he spends most of his time working side-by-side with his helper, it is “without even dreaming of talking to one another.” The few times Cornelius does speak, it is about mundane and trivial matters. To illustrate, after a particularly violent protestor throws a stone through a window, he simply wonders out loud about the cost of replacing it.
Thus, Cornelius remains inscrutable and incomprehensible throughout. The question is whether he is “perhaps an idiot [or] perhaps a philosopher who quietly lives his personal life in the shelter of an invisible carapace.” For examples, his nephew Hans wonders if he is “just stupid,” and Simenon points out how he “tries to understand” the broken window episode.
As well, Cornelius is usually inert. Indeed, he “resembles a statue of Saint Joseph,” remaining “as serene as a saint within his stone alcove” for the entire course of the novel. In fact, he does not do much of anything except weave baskets, drink coffee, eat meals, smoke his pipe, and mark crosses on people’s foreheads. When the rape and murder of the young girl triggers intensive interrogations of the Krull family, he behaves “as if he had heard nothing.” Even as the mob proceeds to writes hateful graffiti on the house, smear excrement on the doorsill, and hang a dead cat on the front door latch, Cornelius “does absolutely nothing.” He seems oddly oblivious to what is going on around him. “He is not inquisitive, not distrustful, not ironic, not whatever he might be. He is simply present!”
The virtually catatonic man at last “summons” Hans before him and, “with obstinacy that makes him even more similar to a Gothic saint,” he insists Hans leave forever. Then, with the mob attacks on the family escalating, the ‘patriarch’ withdraws into the background until—yes—he hangs himself. To my eye, there does not seem to any good or apparent reason for his suicide psychologically, and even the author comments on it this way: “One does not know exactly why.” I do not recall reaching this conclusion with any other suicide presented by Simenon. Possibly, since there is growing evidence that familial and genetic factors contribute to suicidal behavior, the ultimately revealed fact of his brother’s suicide explains this same act by Cornelius.