SIMENON SIMENON. “MAIGRET AND THE GOOD OLD PEOPLE OF MONTPARNASSE” COMES OUT AUGUST 2 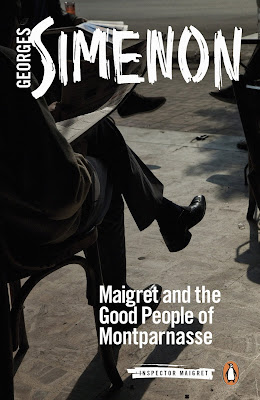 Maigret and the Good Old People of Montparnasse, Penguin’s English translation of Simenon’s Maigret et les braves gens will be available through Amazon.co.uk as of August 2, 2018. Both paperback and Kindle editions are being released. In a promising Penguin maneuver, both editions will also be available from Amazon.com on this same date.
August 2, 2018 holds as the release date from the following other Amazon sources: Australia Kindle; Brazil Kindle; France Kindle; Germany Kindle; India Kindle; Italy paperback and Kindle; Japan Kindle; Mexico paperback and Kindle; Netherlands Kindle; Spain paperback and Kindle.
August 20, 2018 is the release date for the paperback in Australia.
An April 2, 2019 date applies to these other Amazon locations: Canada paperback and Kindle; China paperback; France paperback; Germany paperback; Japan paperback.
Be aware the ISBN-13 for this new edition is 978-0241303931, which should facilitate searching for the book from various other sources.
Maigret et les braves gens originally appeared in 1962. It came out in English translation as Maigret and the Black Sheep in 1975 and six reissues with the same title followed through 1983. The translator then was Helen Thomson, and the translator for this newly entitled Penguin edition is Roz Schwartz.
The original work was the 86th in Simenon’s order of publication, and this work is the 58th in Penguin’s modern series of translations.
This murder mystery presents Maigret with the problem of a good man shot to death amid a family of good people with good alibis. Wondering who would kill someone so well liked, but convinced the killer is in the family circle and suspecting a cover-up, the Chief Inspector works hard for the answer.