Similarity and difference in the three writers' experiences 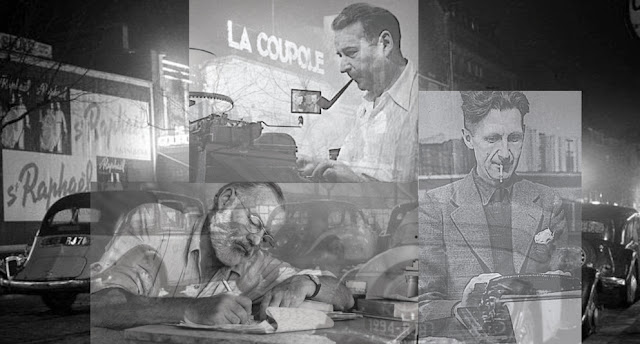 It is widely held that in the 1920s Paris was the international centre of artistic production and cultural life, a fact which was reflected in the large number of writers, painters, and composers from Europe and North America who chose to make the city their permanent or temporary home. In this and subsequent posts, I will consider the Parisian daily lives and literary production of three young authors, the Belgian Georges Simenon, the Englishman George Orwell and the American Ernest Hemingway. I will look at areas of similarity and difference in their experiences of living in the city and reflect on how these are realised in their writing. Of the three, Simenon is the author whose writing is most associated with Paris, so an important axis of these texts will be the extent to which a reading of Orwell’s Down and out in Paris and London (written in 1930 and published in 1933) and Hemingway’s A Moveable Feast (written between 1957 and 1960 and published in 1964) can inform a reading of certain of Simenon’s texts.
Of the three, Hemingway was the first to arrive in Paris at the end of 1921, staying until March 1928 with a number of absences for travel in Europe and short returns to North America. Simenon came to Paris in December 1922 and left the city definitively in June 1938, although in the intervening fifteen years much of his time from 1928 onwards was spent travelling elsewhere in Europe on his two boats, making long journalistic trips, including a world tour, and included a period of residence near La Rochelle from 1932 to 1935. Orwell’s time in Paris was much shorter, from early 1928 to December 1929, but was highly concentrated as he lacked the resources for travel. It is just possible that for a very brief period in March 1928 the three authors were simultaneously resident in Paris although it seems certain that they never met at that time.
A biographical study of the three authors reveals some interesting general similarities in relation to their time in Paris along with some important differences. The most striking similarity is the youthfulness of the three men: at the time of their arrival in Paris, Simenon was only nineteen, Hemingway twenty-two and Orwell twenty-four. Yet, despite their young age, all three had lived through extreme experiences: Simenon’s adolescence in German-occupied Liège, Hemingway’s time as an ambulance driver on the Italian front, during which he was wounded, and Orwell’s five years spent as an officer in the British imperial police force in Burma. Despite the differences in their social backgrounds (Orwell and Hemingway came from relatively well-to-do families, while Simenon issued from the petite bourgeoisie), all three came to Paris with the same aim: to become writers. All three also benefited from some form of initial support in the city: Simenon had the promise of a job as secretary to the author and right-wing politician Binet-Valmer, Hemingway arrived with letters of introduction to the American expatriate literary community and Orwell had an aunt living in Paris.
Here the similarities between the three men end, although further consideration of their lives in Paris reveals a number of “two-against-one” comparisons. The most obvious of these is, of course, that Simenon was a native-speaker of French, whereas Orwell and Hemingway spoke French only as a second language. The latter two lived on the left bank in the quartier latin whereas Simenon, after a short time in a succession of furnished rooms, found an apartment in the place des Vosges. While Simenon’s aim was to be a successful writer in Paris, and the city was the setting of much of his fiction, the other two saw life in Paris as a stepping stone to literary careers elsewhere and their Parisian texts are first-person memoirs written after their departure. In other ways, it is Orwell who is the odd-man-out: Simenon and Hemingway both lived with their wives, both earned a living from writing (Simenon primarily from pulp fiction, Hemingway from journalism and short stories), both moved in literary and artistic circles and both, while they later talked of the poverty of their early years in Paris, were relatively financially comfortable (Simenon as a result of the success of his popular fiction, Hemingway in part due to his wife’s income from an inheritance). In contrast, Orwell lived alone, worked initially as a private tutor of English before becoming a restaurant employee and suffered genuine deprivation.
Nevertheless, the areas of overlap between the authors’ lives and literary output are striking. While Orwell worked as a kitchen-hand in an exclusive hotel, Simenon would use just such a context as a setting in Pietr le Letton (1931) and Les caves du Majestic (1942). The La Coupole restaurant and bar provides the backdrop to much of La tête d’un homme (1931) and was one of Hemingway’s drinking haunts. Finally, the rue Mouffetard, in the immediate vicinity of Hemingway’s apartment in the rue du Cardinal Lemoine and Orwell’s room in the rue du Pot-de-fer, is not only the home of Honoré Cuendet, the lazy burglar of Maigret et le voleur paresseux (1961), but also the setting of the childhood and adolescence of the painter Louis Cuchas in Le Petit Saint (1965).
In subsequent posts, I will consider how these different contexts are realised by the three authors and I will suggest that the reader of Simenon has much to gain from a familiarity with the memoirs of his English and Americans counterparts in 1920s Paris.