SIMENON SIMENON. THE AMATEUR DETECTIVE IN “MAIGRET ENJOYS HIMSELF”

On the unique specifics of how, even on vacation, Maigret gets the job done 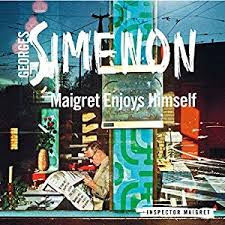 In this atypical and clever novel—Penguin released a modern English translation released in 2018—the author presents the delightful story of a Maigret on vacation while remaining in Paris where a murder case suddenly explodes. Having promised Madame Maigret to stay out of the office and not have contact with the police force, he does not get involved—directly. “For once, he was only a spectator” and “only a member of the public, not a policeman.” However, because “it amuses him to play amateur detective,” the vacationer ends up solving the case in less than a week. Here is a rundown with numbers of the ‘offstage’ techniques Simenon provides the reader to see how Maigret accomplishes this:
Newspapers are Maigret’s primary source of information. In fact, the blunt headline—A CORPSE IN A CLOSET—piques his curiosity, and so, every single day, he reads all 3 of the morning and both of the 2 afternoon newspapers. The result is a total of 25 reads in 10 sessions over 5 days. Despite feeling “a little ashamed to be doing nothing,” Maigret senses the papers “are going to give meaning to his holidays” and so, “like newspaper readers all over France,” he follows the case meticulously, even building “a Manila folder as he does in the office.” Whether it is the nature of journalism at the time or simply the novelist’s means of amplification, some articles are quite long, extending to as many as 7 pages in the paperback novel. Although some reports are “very incomplete” and the photos are not very helpful, the articles provide him with many facts and add considerable fuel to his fire. One sees him vacillate between feeling “jealous” of the man left in charge (Janvier, one of “Maigret’s Faithful Four” as dubbed by Murielle Wenger) and feeling “guilty for acting like the public” and feeling “frustrated” by the “empty” rehashes and lack of “answers” in the papers. Indeed, the eventual headline “HAVE THEY CALLED UPON MAIGRET?” threatens a break in the promise to his wife not to interrupt their vacation.
Phone calls of inquiry are triggered as Maigret reasons, speculates, and questions. He makes a total of 4 calls although never a single one to the inspector handling the case. Because the two men Maigret comes to suspect happen to be doctors, he calls Doctor Pardon 2 times for help. The details forthcoming from his friend contribute significantly to Maigret’s deductive process and progress. The 3rd phone call goes to the very prolific and most involved reporter, Lassagne. Of course, Maigret “disguised his voice as best he could,” not only to make it “anonymous,” but also because “he felt pretty ridiculous playing the role of the nuts who always call journalists.” In any case, the questions he raises get answered in Lassagne’s next article. The 4th and final call goes to a ‘person of interest’ who is out-of-town. Again disguising his voice, Maigret pretends to be the murderer he is homing in on and he succeeds in getting a crucial question answered, thereby cementing his construct of the crime.
Notes are yet another tool. Handwritten in bold childlike printing and unsigned, they are 3 in number, and all go to Janvier. The 1st reads BUT WHY IN THE DEVIL WAS SHE NUDE? and, much later on, the 2nd reads IF I WERE YOU, I’D GO TO CONCARNEAU. The 3rd and final note, hand delivered by a boy paid to lie about its sender, arrives while Janvier is interrogating Maigret’s eventual pick and proves to be the case clincher. (Text omitted for it is a spoiler.)
Other media sources of information (2) for the “amateur detective” crop up while the vacationing Maigrets are dining out and at the movies. The 1st is a radio broadcast accidentally overheard in a restaurant. The 2nd is a movie screen news flash in a theater. Both provide Maigret with useful, informative updates. Of note, television plays no role in his investigation, and Simenon relies on a newspaper to explain this with its “long article on the [distant] future for television.”
Although “Maigret had never seen any of the characters in this drama in their flesh and blood,” he effectively (and familiarly) “puts himself in people’s skin” by the end of the case. Thus, the Chief Inspector gets to “enjoy himself,” sitting in a bar across from police headquarters from which he can hear his choice get locked up as a murderer and watch Janvier drive home as a winner. A wonderful Simenonian final touch is the unsigned postcard Maigret receives while still on vacation. There are only two words—THANKS, BOSS.