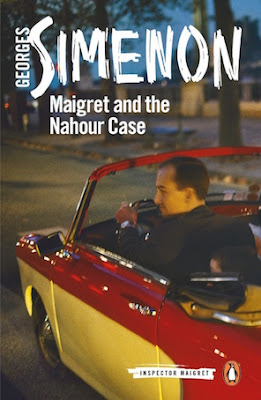 Maigret and the Nahour Case, the modern English translation recently released by Penguin, displays some strong personality traits that the author often highlights in his protagonist throughout the Maigret series. The Chief Inspector manifests, but does not directly express, sympathy for the criminals he uncovers and, in most cases, arrests. These positive feelings include acceptance, respect, understanding, compassion, and even forgiveness for their behaviors, almost no matter how egregious their crimes have been. An important contributory component is his propensity to be non-judgmental of criminals regardless of their crimes. Do not read what follows unless you have read the novel. It is unavoidably a spoiler that examines two miscreants, both central characters in this particular novel.
For her part, devious Lina Nahour is a two-time adulteress and may be an accomplice to murder, yet an “almost paternal” Maigret does not expose her until forced to do so. First of all, Maigret hears that her husband, Félix Nahour, ignored her. Lina claims the much older Nahour married her just for show, “to be seen in public with a pretty, well-dressed woman.” What’s more, she claims the “chaste” man only had sex with her because he “absolutely wanted” a son, presumably a male heir. For her part, Lina admits she married him simply because she “loved the life he led.” The upshot is the couple “lived as strangers” who “rarely went out together” or even “took their meals together.” Indeed, Lina contends Nahour “spent more time with Ouéni than with me.” Maigret intuitively accepts Lina’s description regarding the circumstances surrounding the murder. In fact, Maigret “wanted to believe her” even if she was “always like a little girl who, once caught, did not consider a lie a great sin” and he “felt a kind of admiration for the calm candor with which she reeled off her lies.” Eventually, Maigret learns the extent of Lina’s dishonesty. Married Lina was factotum Fouad’s long-term lover. In addition, she withheld this history from her fiancé Vicente, fearing it would block her chance to marry him. Indeed, she “made him believe Fouad’s motivation [to shoot Nahour] was personal revenge” against her husband. However, these damaging facts only become public when Maigret is a witness in court—a role he has always hated—where, under oath, the reluctant, compassionate man must answer the prosecutor’s questions truthfully.
For his part, diabolical Fouad Ouéni first murders his boss Nahour in cold blood and then frames his rival for Nina out of jealousy. Maigret both respects Fouad for his “chess player’s absence of nervousness” and for the fact that “it was bound to be difficult to catch him in a mistake.” Nevertheless, as “their feints and ripostes” in the ensuing “chess game” continue, the Chief Inspector uncovers how “humiliating” Fouad’s “situation” with Nahour had been and understands “nothing stirs up hatred like humiliation.” A desire for revenge motivates Fouad, first, to take Lina as a lover and, later, to kill Nahour as a brute. Ironically, the shooting both protects the woman he “still loved” and punishes her for jilting him—the ensuing scandal will prevent her from marrying the lover who replaced him. Maigret appreciates how, in killing Nahour and thwarting Lina, Fouad obtained revenge on two people. Maigret also respects how, by not seeking exculpation for the shooting as a crime of passion to protect Lina, Fouad preserved his honor, silently Fouad accepting his arrest, trial, conviction, and ten-year imprisonment.
Maigret also stays silent until, as a witness under oath at the trial he has to testify, he honorably “responded as objectively and concisely as possible to the questions.” This required truthful testimony ends up incriminating both Fouad and Lina at the same time. No wonder, after the guilty verdict came down, one hears sympathetic Maigret confide to his friend Pardon, “I failed” and add, “In the end, Ouéni won.”