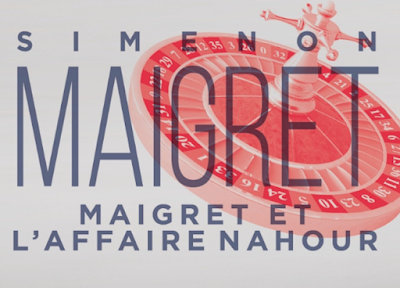 Maigret and the Nahour Case, the modern English translation recently released by Penguin, displays some strong feelings that Simenon often highlights in his protagonist throughout his Maigret series. Running from discomfort to annoyance to resentment, they affect him when faced with people from higher social settings, particularly where wealth is a major factor in their ‘elevation’ in status.
In this particular novel, Maigret confronts an array of “elegant foreigners.” As the author points out, “Maigret had been called upon to deal with personalities of this sort many times.” Representing “the privileged class,” they “belonged to a different world than his.” The central characters—one of whom has just been murdered—are intimately, but to external appearances indifferently, involved in “a story of a ménage à quatre.” They come from three different countries: Lebanon, Holland, and Colombia. Two older men are Lebanese, one a professional gambler and Catholic, the other a factotum and Muslim. A young Dutch trophy wife of unspecified faith and a young Colombian student from a strongly Catholic family round out the quartet.
Faced with this heterogeneous group of people, in particular “not all of the same race,” Maigret “had rarely felt so disoriented, as if outside normal life.” […] “Here, he felt plunged into a different world where people’s reactions were unpredictable.” […] “There were so many why and wherefores he could only address them one by one. Nothing was plain. Nothing was simple. Nothing took place as in other families and other households.”
The common denominator in their personalities and behavior seems to be money, of which they have a lot. But it was “not just the money.” It was “a certain kind of lifestyle with certain attitudes, even a certain morality different from the morality common to ordinary people.” As a result, Maigret “never felt completely at ease” with “characters of this kind” and “he had trouble controlling an irritation one could consider jealousy.” Making matters worse for him, he “had rarely encountered so little cooperation” in the course of an investigation. Self-confident, unperturbed, and indifferent, these “insolent” and “calculating” types throw up multiple roadblocks to his interrogation.
But what is especially difficult for the Chief Inspector is the dishonesty he runs into time and time again. So much so that he asks himself: “Wasn’t everyone in this case lying?” Every suspect and witness tells a different story—if they admit to knowing anything at all. “It seemed to him that everything here was false, that everyone was lying.” Thus, he complains to his associate Lucas about the lack of truth: “So far, in this case, I’m not sure if I have heard a single truth.” And he warns a key witness to tell the truth: “In this case, I have constantly found myself in front of people who have taken great liberties with the truth.”
In typical fashion, Maigret relies heavily on “his intuition” in sorting out what he regards as “a ruse or a game” for the suspects and witnesses. That “everyone seemed to be totally unaware of what the others were doing” does not fool him. Although his frustration grows in response to their obstruction, he recalls “the maxim: always attack the point of least resistance” and eventually deduces that it boils down to a matter of recognizing “who will blink first.” Thus, he carefully identifies the most “likely” individual, the one he consider the weakest link in the chain of resistance. And, under the Chief Inspector’s familiar pressure, this individual cracks, allowing Maigret to use the information gained to break the others down. Although the group has strained his understanding, by the end (and once again in the series), the individuals do not elude his intuition, and he wraps up the case.