SIMENON SIMENON. THE BLUE ROOM: THE MOVIE AND THE BOOK

How the movie does not live up to Simenon’s book. 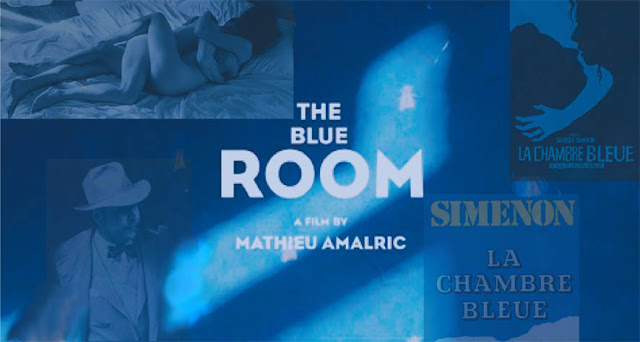 The release (2014) of The Blue Room movie stimulated me to read the original (1963) La Chambre bleue novel before watching the film. As a matter of fact, I recently repeated this sequence. Beyond my interest in most things Simenon, I was curious to compare the two because I’m still looking for a movie that accurately reproduces a book. Why moviemakers change things the way they do, including wholesale alterations in plots, especially the denouements, flabbergasts me. My theory? They consider themselves independent artists and, also, they know that movie studios have to produce what moviegoers want to be successful.
Simenon’s book is a thought provoking mystery about passion and murder and guilt. Its construction is clever and intricate. Flashbacks to the opening scenes and fast forwards to the criminal processes are interspersed within the chronological descriptive narrative. Reanalysis of events is the rule. The reader knows right away that crimes occurred, guesses gradually about their nature, but only learns at the end what they actually were. Within my world of Simenon, the book gets an A.
On the other hand, within my world of movies, the film gets a B+. It does a good job with the characters and plot. It meets the challenge of making the flashbacks and fast forwards understandable through dialogue and visuals alone—without the spoon-fed explanatory text that benefits novels. However, numerous inaccuracies tend to diminish the film. Too many changes stand out. A few are logical, but a lot are inexplicable.
To make the point, the title should really be The Blue Bedroom. Sexual activity in bed is fundamental to the story, and bedroom is the most common translation of chambre. (To be fair, the book’s English version made and has maintained the same inaccuracy since 1964.) What is more, the major characters get new names, like Tony becoming Julien and Andrée becoming Esther. The secret signal for the lovers, the pink-bordered white towel in the window, turns all red, which is most unfortunate since Simenon’s handling of color is a tour de force in the book. Indeed, even the blue room is barely blue! The grocery store transforms into a pharmacy, substantially converting multiple crucial plot components for the worse. Does one order fruit preserve from a drugstore? Handwritten ‘anonymous’ letters, all four of which are importantly and ironically evidential as noted by the postman in the book, take on other forms in the film, such as a glued-up collage stuck under a windshield wiper. Even if updating to modern cars and trains and farm equipment is logical and appropriate, adding digital images from smart phones to the pot is not.
In sum, the bad news is the movie’s accuracy comes up short, but the good news is the overall dramatization does not disappoint.
David P. Simmons
Pubblicato da Maurizio Testa a 00:33