SIMENON SIMENON. SEVERAL EXPRESS SOME IDEAS ON THE MAKE-UP OF A BIG NOVEL

Still more on the big novel 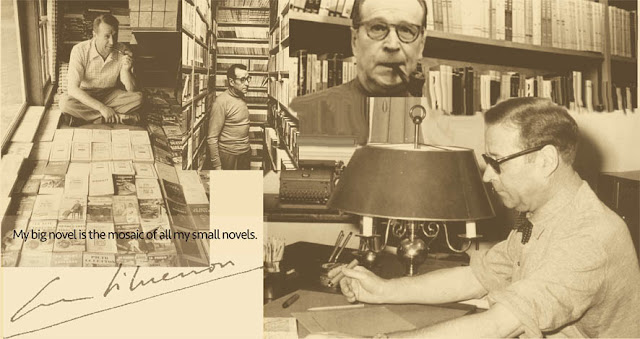 Here are some more interesting takes on Simenon and the big novel as a mosaic:
First is a 1955 quotation from a most informative interview with Simenon by Carvel Collins (Georges Simenon, The Art of Fiction No. 9 http://www.theparisreview.org/interviews/5020/the-art-of-fiction-no-9-georges-simenon). Here is where Simenon’s mosaic explanation seems to have come up originally. At the very end of the interview, more as a statement than an answer, Simenon says: ‘For instance, all the critics for twenty years have said the same thing: “It is time for Simenon to give us a big novel, a novel with twenty or thirty characters.” They do not understand. I will never write a big novel. My big novel is the mosaic of all my small novels. You understand?’
Then, 34 years later, ironically in 1989 the year Georges Simenon died, Charles Champlin revisits the mosaic description in this way: “Now the big novel is complete, and, as we can see, it ended in 1972 with the last Maigret (who is part of the dramatis personae, whether Simenon would have it so or not). And it will remain a quietly incisive and almost perfectly detailed portrait of French life across nearly half a century. It is a social history to set alongside the work of the great French novelists of earlier times. And it is such marvelous reading and re-reading.” (A Gift Extending to the Tips of His Fingers http://articles.latimes.com/1989-09-17/books/bk-462_1_georges-simenon/2).
Fast forward to just a year ago, when referring in February 2015 to the developing Penguin translation series, Elliott Colla opines: “Now that the entire Inspector Maigret series is coming out, we can read Simenon’s small novels as a huge mosaic — and conceivably, in their sum, as one great big novel.” (Maigret’s Jurisdiction https://lareviewofbooks.org/essay/maigrets-jurisdiction.)
Thus, having only recently run into multiple writers weighing in on the big novel as a mosaic, I can’t help feeling a little smug that I arrived at this concept independently.
David P Simmons