On the upcoming television series and Rowan Atkinson, the new Chief Inspector Maigret. 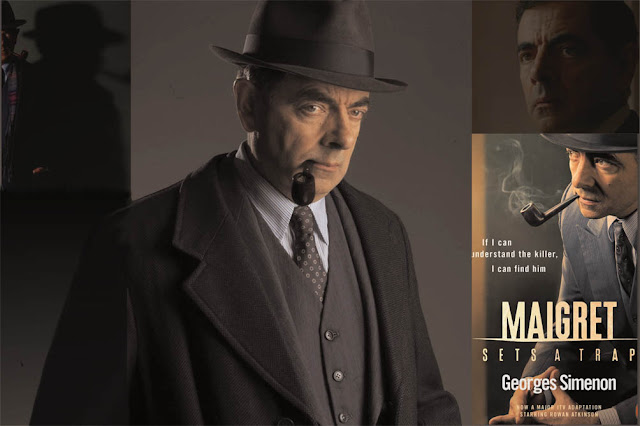 A new Maigret television film series by ITV will begin appearing on March 28th. First out of the box will be a two-hour standalone presentation: Maigret Sets A Trap (Maigret tend un piège). Due to follow, but at a so far unspecified date, is Maigret’s Dead Man (Maigret et son mort).
ITV, a commercial television network centered in Britain, plans a full 12 episodes in a series to be entitled Maigret. French public television channel France 3, German public broadcaster ARD, Swedish broadcaster TV4, and Danish DR are all expected to run the series eventually. Whether the USA will join in is not yet clear.
In the first production, after the stabbings of five women in Montmartre, Maigret sets up a complicated ruse that succeeds in flushing out the apparent serial killer. However, after the arrest, another stabbing occurs….
In the second production, a mysterious man heckles Maigret with a string of telephone calls, claiming someone is following him throughout Paris with the intention of killing him. Suddenly, the calls stop and an unidentified body turns up, so Maigret sets up another ruse that only succeeds in triggering another murder….
Rowan Atkinson plays Jules Maigret. Atkinson faces a challenge in this straight dramatic role because his experience has been primarily that of a comic actor. According to Daily Mail.com, “this is his first foray into crime drama.”
If interest and motivation are useful determinants of success in acting, Atkinson sounds promising in this role. He has said, “I have been a devourer of the Maigret novels for many years and I’m very much looking forward to playing such an intriguing character, at work in Paris during a fascinating period in its history.” Furthermore, the Daily Mail described him as “an actor who will take only the roles he really loves.”
A reservation of mine is how Atkinson will look. Readers know Maigret is massive (massif). Whether big, wide, heavy, or fat (I’ve read he approached 250 pounds), the stories emphasize his large size, sometimes equating him with large animals. An elephant and a bear are two that come to mind. Judging from the images I’ve seen so far, Atkinson doesn’t evoke either of these. Curiously, Maigret AKA Simenon devotes a few pages in Maigret’s Memoirs to his observations about how various movie and television actors have not looked like him. Unless this newest actor has bulked up considerably, he’ll have to rely on the way he moves to effectively depict the pachyderm (pachyderme) that Maigret readers anticipate. Atkinson has a reputation as a physical performer, but it’s as a comic one, and there’s never anything comic about Maigret. Thus, if Atkinson doesn’t look massive, he will have to play massive to succeed.
Size considerations aside, it will be interesting to see how Atkinson stacks up against Rupert Davies, Michael Gambon, Richard Harris, and Charles Laughton, the other well-known Maigret portrayers in Anglophone films.
David P Simmons
Pubblicato da Maurizio Testa a 01:39