SIMENON SIMENON. THE LITTLE DOCTOR: THE GIRL IN PALE BLUE

The second story in which the doctor rescues two innocents and prevents his own murder. 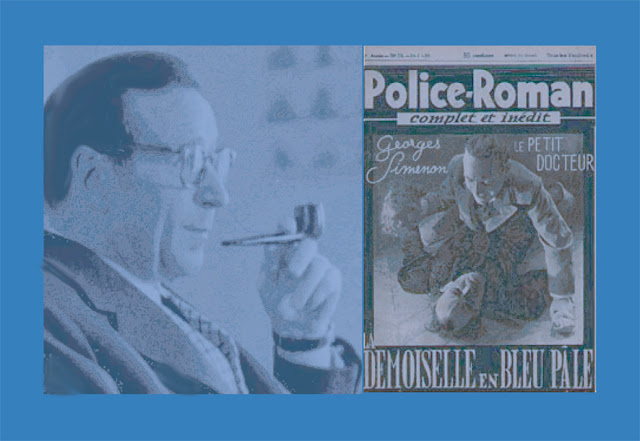 The second episode in this collection takes place a month later at a seaside resort where Dollent, still a bachelor at 30, falls in love. According to a lighthearted Simenon, this happens to him “at least once and often several times a month” whereas Chief Inspector Maigret has but one love throughout his long life. The target of affection this time is Lina, a delicate perfect doll, but just a teenager under the tight guard of her overly made-up and overdressed duenna, Miss Esther. Alas, Lina is in love with Bernard, a handsome, rich speedboat racer and an opposite figure to the doctor. When Lina openly steals money off a roulette table, our hero rescues her with a lie. Despite this, she ignores him―except for insulting messages she traces in the sand on the beach with her toes. A mind-your-own-business note shows up in his locked room and, five stories below its open window, a barefooted man lies unconscious on the ground. Additional strange clues of an English newspaper advertisement read by all and a colorful beach ball tossed onto a lap propel our hero deeper into the mystery until, after a fight and a gunshot, he emerges victorious with its resolution.

Beyond the intriguing plot, something else is interesting: Dollent’s compulsion to drink in order to investigate. How can a detective who drinks so much be this observant, rational, and effective? In The Doctor’s Hunch, Dollent puts away two Pernods, four white wines, and uncounted beers all in one day, and now in The Girl in Pale Blue, he follows an afternoon and evening of hoisting whiskies with downing two glasses of port plus some rosé before noon the next day. For a practicing physician, this is not appropriate behavior unless one is off call or on vacation (and he may be). Perhaps the Little Doctor is going to be like the Chief Inspector, that is someone who consumes large amounts of alcohol on a daily basis. To be fair, drinking seems common, if not customary, for detectives on the job in France during Maigret’s time. What is more, drink only impairs Maigret once as I recall, that singular occasion being when he celebrates his promotion to the Special Brigade so frankly described in Maigret’s Memoirs.
Wondering about possible explanations for alcohol’s prominent role in Simenon’s fiction (and reportedly in his personal life as well) stimulates me to read Pierre Assouline’s extensive biography, Simenon. Expecting the 1000+ pages in the French edition to provide valuable insights into topics like this one, I plan to translate and share certain tidbits with you in future pieces.
David P Simmons
Pubblicato da Maurizio Testa a 07:45